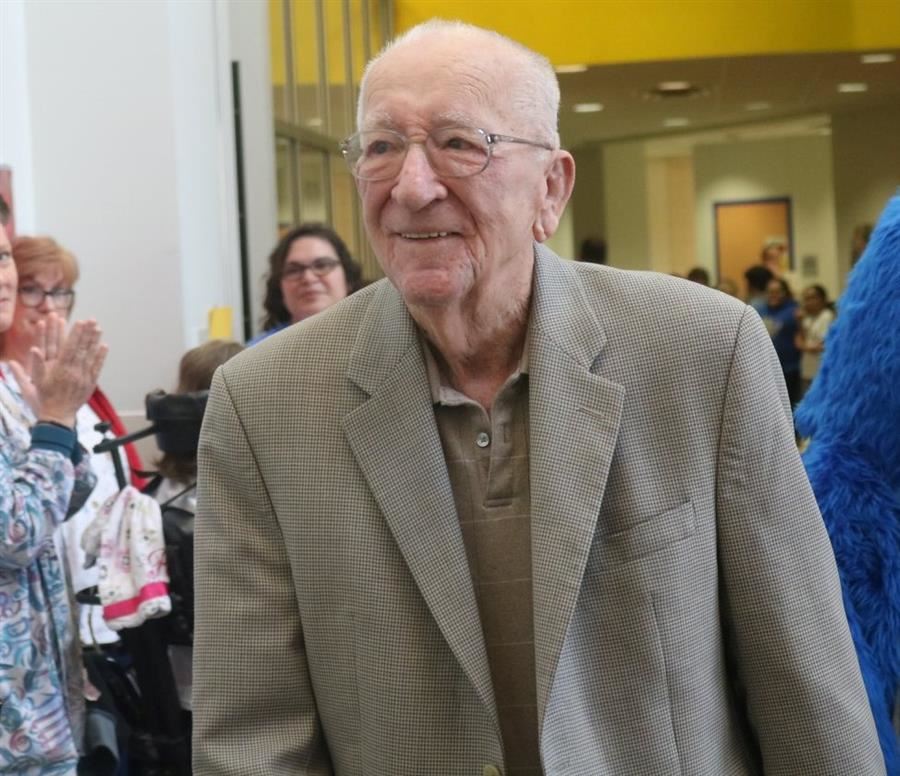 The Hays Consolidated Independent School District is saddened to announce that Ralph Pfluger died Friday, May 8, 2020. Pfluger, the namesake for Ralph Pfluger Elementary School, served on the Buda School Board when Hays CISD was created in in 1967, and was selected as one of the seven founding members of the first Hays CISD School Board. In 2012, for his lifelong contributions to children, the district, and education in Texas; the State Board of Education named him a Hero for Children.

“I’m not good at talking about myself or bragging on my accomplishments, though in hindsight, I am very proud of all that I have achieved advocating for students at the top level (as a school board member) and working with them individually (as a mentor). I know I have helped many students through the years and I cherish each and every one of them,” said Pfluger at the time he received the Hero for Children Award from the state. “More importantly, I would have to say they have helped me too. There’s nothing more important and there’s no greater feeling than knowing you have helped a student see their full potential and achieve more than they thought they could. I think each generation owes it to the next to pass along wisdom and lend a helping hand where possible to those who need it. None of us are where we are today because we did it all on our own. Everyone has benefited from the kindness of others. It is our duty to return the favor.”

Pfluger was born in Pflugerville, Texas, on July 30, 1930, but had lived in Hays County since 1953, one year after marrying the love of his life – Lois. His presence on the original consolidating board of Hays CISD was no accident. For decades, he laughingly described how he first came into school board service for Buda in 1963.

“The Buda school district was having its share of problems at that time and one day two guys came by our home, then on FM 1626, while I was mowing my bar ditch. They were looking for me (or someone) to serve on the board and I said ‘Sure!’”

“I really didn’t know what I was getting in for,” Pfluger admitted, describing his first board meeting, where an unpopular 4-3 board personnel decision was decided by his vote. Angered by that vote, a member of the audience stood up and told Pfluger “Come on outside” and threatened a whipping. It didn’t happen, but the new board member figured, if necessary, he’d be safe if he got to the door because “he’d never catch me.”

In 1967, the Buda School District consolidated with the Kyle and Wimberley districts. Pfluger was selected as one of the two board members from Buda to serve on the new consolidated board because of his leadership and character. The succeeding years brought the distinct challenges and rewards that come with school board membership. Pfluger served as a Hays CISD trustee until 1974, including terms as the board’s vice president and president. All the while, he continued his ongoing professional life as an administrator at the Marbridge community for adults with special needs.

Always a follower of school district matters and unable to recruit a board candidate representing his views, he decided to run for the office once again in 2004 and did so successfully, occupying his 21st century seat until his retirement from the board in 2010. In 2011, he agreed to fill a vacancy on the board and served until the May election that year.

He complemented his trustee work with a regular (some describe it as “religious”) schedule of volunteer work focused on remedial reading and mentoring. It was that personal mentoring for which he was so highly recognized, an almost unique talent he brought to Hays CISD campuses—and individual students—fortunate enough to connect with him.

In September 2010, Hays CISD honored Ralph Pfluger by dedicating an elementary school in his honor. In August 2019, at one of his last districtwide appearances, Pfluger was a keynote feature at the dedication of the district’s third comprehensive high school – Johnson High School. His remarks about the district’s history, formation, and the quest to get a high school near the City of Buda, are all preserved in a video that featured him: www.hayscisd.net/pflugervideo. It had been his hope to be present at the dedication of the high school, where he received a standing ovation by more than 2,000 attendees. In February 2020, his namesake elementary honored him with Ralph Pfluger Day to help mark the 10th anniversary of the school’s opening. The video tribute to that event is at: www.hayscisd.net/ralphpflugerday.

“Words cannot adequately account for our deep feeling of loss today,” said Hays CISD Superintendent Dr. Eric Wright. “The tremendous growth in our community during the past five decades can be directly credited to Ralph Pfluger and the men and women who made critical decisions a half century ago. However, it is his impact, not just on our community, but on the entire world that will be his legacy. He touched the lives of so many children who continue today to pass along to their children the opportunities, wisdom, and love of service inspired by Mr. Pfluger.”

Ralph Pfluger is survived by his wife of 68 years, Lois, two daughters, three sons, 14 grandchildren, 22 great grandchildren, and many other relatives. He is also survived by the nearly 21,000 students and 3,000 employees of Hays CISD.